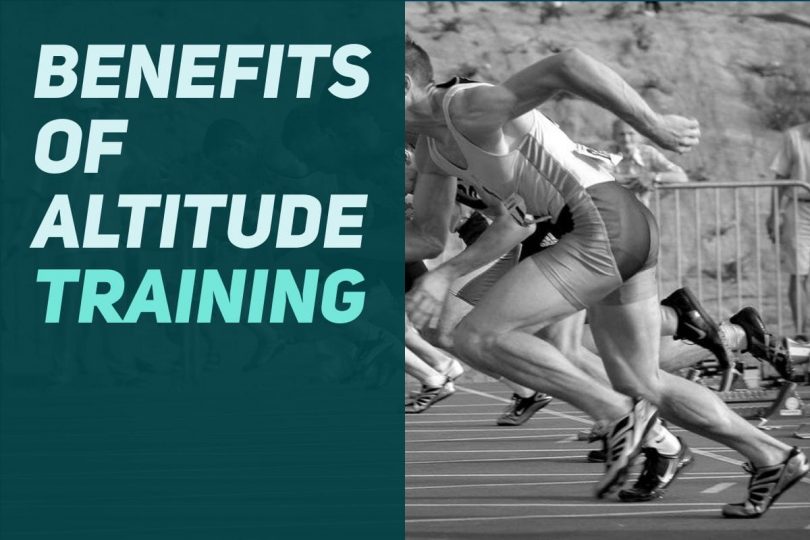 There’s plenty of information available about the benefits (or not) of altitude training, but no consensus regarding the degree of fitness gained. I’ll convey information on the topic from theory, research, and my own experience.

As we gain elevation our atmosphere thins, eventually going to -0- pressure as you get far enough from Earth’s surface — outer space, very tough to train there! 🙂 The composition of the air we breathe is not entirely oxygen, but oxygen is the part we use for oxidative phosphorylation. This partial pressure of oxygen is reduced in proportion to the altitude above sea level. Oxidative phosphorylation is the process where we burn ATP for fuel; the final step where glycogen (the stored form of carbohydrate) and fats can be used for fuel. Unless our physiology has adapted to a reduced oxygen environment over time, the energy levels we can train and race at are lower in proportion to altitude gained.

Our bodies make adaptive changes when subjected to reduced oxygen levels at altitude. Erythropoetin [EPO] production is stimulated which in turn increases our red blood cell (hematocrit) level (the component of blood that transports oxygen to muscles). If we can increase the amount of oxygen that makes it to our muscles over a unit of time, we can burn more ATP and do more work (muscle contractions).

The adaptive responses to partial pressures of oxygen at altitude are undisputed, but the exact degree of benefit for endurance sports performance is not known, in fact it’s quite a contentious issue.

The benefits of an increased red blooded cell count are obvious, but reduced intensity levels are the downside of training at high elevations. At altitudes of 5000ft or more, training at familiar sea-level intensities becomes progressively more difficult to sustain with less oxygen available. This applies especially to athletes who come from sea-level training environments whose metabolism is already working overtime to make altitude adaptations along with the regular stress of training.

Experts do agree on the ‘sleep high, train low’ recommendation though. To get the best effect of altitude adaptation with the intensity of training at lower elevations (more oxygen=higher intensity), you spend your training day ‘low’, and the remainder of your day ‘high’. Clearly this is impossible or at least impractical for most of us, but can be done in certain locations. I remember the story of a cyclist in Albuquerque. He camped at the top of Sandia Crest (~10,000 elevation), but did his training at ~5000 feet. With that sleep high, train low technique, he did some remarkable 40k TT times that he might not have done living entirely at 5000ft.

For the majority of us — who live at sea level — several devices exist to simulate the effect of ‘sleeping high’. Hyperbaric chambers are sealed vacuum chambers you can sleep in that reduce air pressure exactly as living at altitude would. There are also oxygen tents that leave air pressure unchanged, but pump in air with a lower percentage of oxygen, simulating the partial pressure of oxygen at higher elevations.

The ergogenic aid EPO has the same red blood cell volume increasing effect as training at altitude. This is a USOC/ITU/USAT banned substance that many endurance athletes have used to enhance their performance. It was originally developed to help those with anemic conditions created by medical problems (kidney dialysis for example). It currently has no markers and cannot be detected though testing, and since up to 51% hematocrit count is allowed, it can be used (illegally) with periodic testing. Normal humans have hematocrit percentages in the 40-50% range.

Despite many studies with varying results, there’s no consensus about the benefit of altitude training. Most studies cite a 1-3% improvement in performance for sea level endurance athletes training at altitude, then coming back to sea level to compete. In comparison, the effect of EPO is huge with performance gains up to 10% possible.

As a sea level athlete, my own experience after many training trips to ~5000 feet are all positive. One of my best ever performances as a cyclist was after only a week sleeping at 8000ft+, training at 5000ft, and racing at 5000 to 8500ft. Typically though, to get significant adaptation a stay of 10 days or more is needed. As a rule, the longer your stay at altitude the greater the adaptive changes. Athletes living at higher elevations probably have benefit full-time. I’ve experienced improved performance for about 2 weeks after coming back to sea level, but after that the benefit fades quickly.

Coming from sea level, the initial experience of high intensity training at 5000ft becomes obvious the first time you push it, but at lower intensities not much difference is felt. Training at 8000-10,000ft can be quite a shock. Even a very fit athlete will feel a difference just going for an uphill hike at those elevations. Beyond the benefits to your blood chemistry, most athlete’s breathing rate and volume will increase while training at altitude.

In my experience, the loss of top-end speed due to lower training intensities at altitude are negligible. As endurance athletes racing over hours’ duration, our ‘economy’ is much more important than our anaerobic abilities. For athletes racing events up to about 20-minutes potential power loss could have a negative effect on performance.

Here are some differences you’ll feel coming from sea level to training at altitude:

> Holding your normal swim paces/times in the pool will be just a little tougher, while sprinting will leave you gasping!

> For cycling, you won’t feel any difference until you climb or push it to a tempo/interval pace. The overall pace for rides will be about the same, because despite less oxygen to use, there’s also less wind resistance. Generally, you’ll go slower on uphills, but faster on flats and downhills. Due to the benefit of less wind resistance, virtually all timed cycling world records have been set at altitudes of about 7000ft.

> Runs will be slower for almost every workout. On a recent trip I was about 3-seconds slower per lap on for a track workout, and about 12 seconds slower per mile for a tempo run at the same heart rates as sea level. The loss of run speed is less after the physiological adaptations take place, but because running is so oxygen intensive, I’ve never matched my best sea level run times at altitude even after spending months at 5000ft.