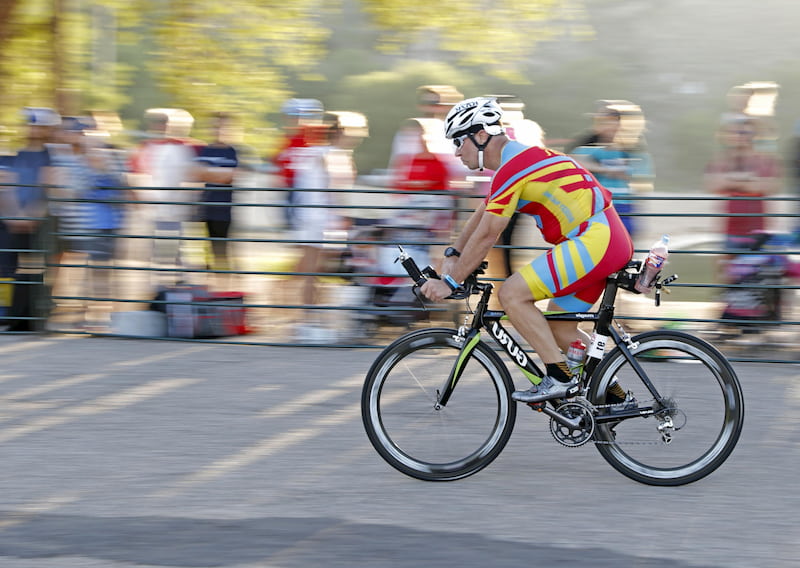 Which is your strength? All triathletes are endurance athletes, but races can range from sprint triathlons of about an hour to Ironman efforts for up to 17! Do you cope well with the sensation of lactic burn and prefer to have it over with quickly, or would you rather stretch your effort out over hours with less intensity? My recommendation is to try everything, but then go with your strength and develop it to the max.

Pure sprinters don’t even use their aerobic systems on race day. Their performance is determined by power and top-end speed in events of 30 seconds or less. Middle distance athletes use a combination of both their aerobic (with oxygen) and anaerobic (without oxygen) systems in events of up to several minutes. Beyond that it’s all aerobic except for an anaerobic burst to get over a short hill, close a gap, or sprint at the end of a race.

Body type makes a difference as well and typically muscle type is in sync. Usually predominantly slow twitch types have medium to small builds; usually fast twitch types have medium to large builds. If you’re not sure, look at the athlete’s wrist to determine body type by bone structure. No matter how much weight training one does, you can’t increase the size of your wrist; it’s all bone and tendon. To a lesser extent you can determine bone structure by ankle size.

For any endurance athlete, regardless of build or muscle type, an efficient power to weight ratio is always a good thing! This means a low percentage of body fat as measured by a body composition test. Running speed is in a large part gravity dependent. Aerobic efficiency determines how much energy your muscles develop out over time, and in turn the strength of each muscle contraction determines speed potential, and finally the distance you travel with each stride will be limited by your weight. All else remaining equal, the lighter you are, the further you’ll move with each stride. This is why most elite distance runners are relative flyweights.

Athletes who excel at sprint and Olympic distance are able to hold a very high percentage of their max HR for 1-2.5 hours, usually in the 85 to 93% of max range. They’re keeping the effort level near ‘redline’ from start to finish. Athletes who do well at ½ Ironman distances (the ‘middle distance’ of triathlon) maintain a HR range of 75 to 85% for 4 to 7 hours. Athletes who do well at full IM distances maintain a range of 65 to 75%HR which is similar to relatively comfortable training levels for shorter workouts, but holding that pace for 8 to 16+ hours! The Sprint/OD athletes cope with the sensation of with lactic burn; IM athletes cope with soreness and overall fatigue. IM athletes are also limited by the efficiency of their metabolism. Some athletes struggle with this despite a perfect nutritional plan on race day while some seem to have no problem.

Every athlete I’ve coached eventually learns what his or her best distance is. It doesn’t mean they can’t do well at other distances, but they may never excel at those distances. The psychological component counts for a lot. Good experiences at a certain distance lead to confidence that builds over time.

Are your sprint to IM performances of equivalent quality, or are your PRs better at one distance than another? Take your PR on an accurately measured OD course and multiply it by 4.6-4.7 for IM time potential. Take your ½ IM PR and multiply x 2.2-2.25 for IM potential. These ratios assume the same degree of difficulty for the course and similar environmental conditions (hilly, flat, cool day, hot day, etc.).

It’s a rare athlete who can compete equally well at all distances. I can think of only a few athletes who’ve won World Championships at both Olympic Distance and IronMan, quite an accomplishment indeed!